Seller: Palm™
information about the seller and its items 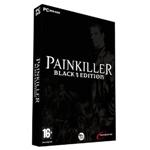 You play as Daniel Garner, a seemingly regular guy who as just been killed in a horrific car accident. Trapped in a dark and unwelcoming world between heaven and hell, you struggling to uncover the reasons why you´ve been denied entry into heaven. Awaiting your purification, you must fight through a seemingly endless number of demon soldiers as you to attempt to stop an imminent unholy war.

The game is inspired by such classic titles as Quake, Doom and Serious Sam, with the emphasis on killing large numbers of monsters. The game is divided into five chapters, each about five levels long. The player´s objective is to get through each level, from start to finish, by slaughtering hundreds of monsters. One of the game´s most important aspects is its diversity. Each level presents a new location with various themes and art styles. The levels include castles, monasteries, an opera house, Venice, graveyards, and more. Monsters are also very different, with new ones almost every level. There are five "boss" levels where the player fights a boss. The game presents an option to complete a special task each level, which results in the player getting a "tarot card", a rare, hard-to-obtain bonus. Each equipped card provides different bonuses for a small amount of time, like powered-up weapons or slow motion. The game features multiplayer, which includes classic modes like Deathmatch and Capture-the-Flag.

This product is distributed through digital distribution, it represents the only PIN-code and does not contain any packages and boxes
Please follow these instructions to activate a new PIN-code on Steam:
1. Launch the Steam client software and log into your Steam account.
2. Click the Games Menu.
3. Choose Activate a Product on Steam...
4. Follow the onscreen instructions to complete the process.